skip to main | skip to sidebar

It's been a while since I posted anything, then again there's nothing much for me to post about. I figure I'll just vent a lil here cause I won't in real life, things must always seem happy right? :(

At the moment money is tight as my wife is having a hard time finding a job since she had gotten laid off. At the moment I'm working at a nice company but am not a full time employee, I'm a contractor. So no benefits and job stability just isn't there right now, maybe in a few months it'll be better but I don't want to commit to anything again until we've got a steady, dependable cash flow. I'm hoping a permanent position happens soon here as it's a great place to work and it's close to home and the school I've been scoping out.

About a month ago I had to make the choice between my jiu-jitsu classes and my daughter's Judo classes. This was a no brainer for me. As much as I like going to class, I think she loves her's even more. She's an avid reader but her books are scattered everywhere and when she needs a book she has to search all around the house for it. She reads a new book, puts it down and does something else and forgets about the new book and moves on with her life until she decides she wants to read it again.

When it comes to Judo though it's a totally different story. Friday night, gi is by the stairs(folded AND tied by her-she doesn't fold clothes other than her gi), slippers are on the next step along with her empty sports bottle. Saturday morning she wakes up and asks for oatmeal/brown sugar, so she doesn't fart during class, she takes the water bottle pops a few ice cubes in the top and I or my wife fills it for her, then we're off to class.

She walks in bows her lil half bow, takes off the slippers, steps on the mat does a lil half bow again, then she's hanging out with the other kids who are stretching and not running around playing(with her sister.) Sensei walks in bows in(she does her full bow) the class and they being their warm ups, go into drills/throws and then usually class ends with a game of Sea Monster. 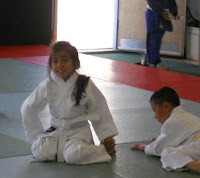 The whole time she's enjoying herself, she's smiling during the warmups and Sea Monster and just having fun with it. The smile goes away during drill/throw portion of the class and this is when she is seems focused and wanting to hear everything Sensei is saying and watching all his movements so she can do them too. After class she takes off the gi top and we head out for an after class snack and then we head home, where her shenanigans continue.

She and her sister have really gotten into the Gracie Bullyproof DVDs and always ask me or their brother to practice one technique so they can move onto the next one. So sometimes after Judo, we go to the garage and drill a technique or two from those DVDs-they even demand that I wear my gi during this time. Once she decides that she's done, she hands me her gi for washing, reminds me later to take our gis out of the wash and helps me hang them so they're ready to go for next week.

My choice was really simple, for the moment I'm gonna be content rolling in the garage with my son and cousins. She on the other hand will keep on being the little judo chick that she is cause it makes her happy and she said she likes making the boys cry when she throws/pins them, as my mom would say with a sigh "oh my Goodness..." 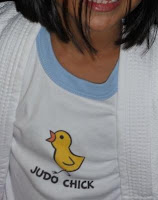 Just writing about this child makes my day brighter, hopefully soon I'll be back in class working on my white belt and posting about how much I hurt, I die in class and eventually how I went on to win the Absolute Division at the Worlds!!!...what? I can dream right? LOL
Posted by Fried Chicken Skin at 9:26 AM